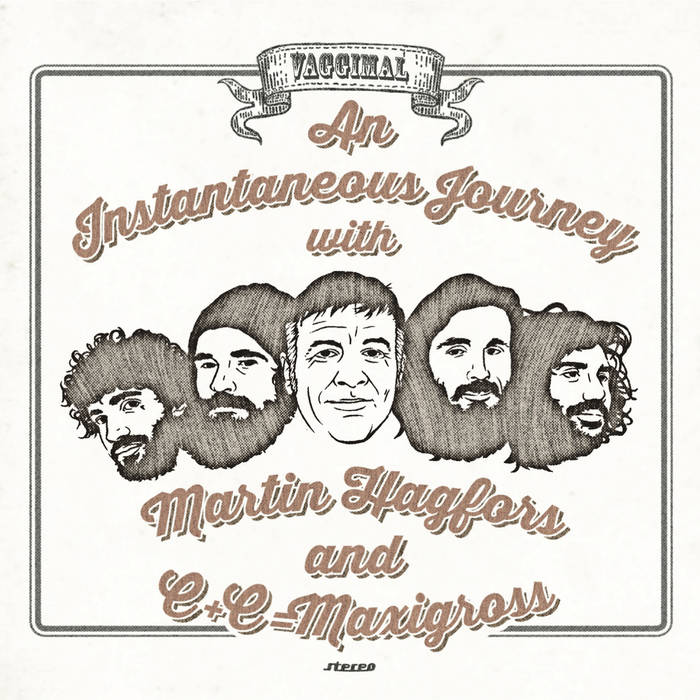 The tireless psychedelic collective C+C=Maxigross is back with a new musical project: a special EP recorded together with the Norwegian songwriter Martin Hagfors.
After the long tour for the first album "Ruvain" (Vaggimal/Audioglobe, April 2013), who took them around Europe fo more than 120 concerts, included some shows the best international festivals (Primavera Sound in Barcellona, Fusion and Reeperbahn in Germany among the others), C+C=Maxigross are about to publish a new EP, recorded together with the songwriter Martin Hagfors (HGH, ex Home Groan).
This album was recorded last spring in the band's studio on the mountains of Lessinia, an aera close to Verona. This musical adventure started exactly when when Martin landed in Italy: the plan was to record an album and go on a tour within a month. And this is exactly what happened: a real “instantaneous journey”.
Maxigross and Hagfors met for the first time directly in the studio, where they re­arranged and recorded six Hagfors's songs. Right after the super group left for a two­weeks tour all over Italy.
Now that the EP is ready to be published, Martin Hagfors & C+C=Maxigross, will get together again for a bunch of concerts in Italy, to bring this instantaneous and genuine psych folk experience to as many people as possible.
This group of musicians, with different origins and age (Martin was born in 1960, whereas Maxigross are in their twenties), found a special connection during this collaboration. The meeting point was the love they share for folk rock, for the spontaneity of live recordings, for the use of vocal harmonies and vintage instruments. This all led to a gentle albeit acid psychedelia, that reminds the cosiness of a wooden house and a friendly and domestic atmosphere. And this is exactly the environment in which the album was recorded: C+C=Maxigross and Hagfors spent a week in a house on the mountains, in front of a faboulous valley and next to the fireplace. During this time local food was always ready to be grilled, glasses were always full of Valpolicella wine and local musicians were invited to give their contribution. That's how Silva, aka Phill Reynolds, guitarist and songwriter from the near city of Vicenza, gained a fundamental role for this EP, playing vocal harmonies, banjo and different guitars, included the long solo in “Astrodome” that close the EP.
In these six songs, that go from the folk with a British reminiscence of “Maximum Amount” and “Coffee or Cigarettes”, though the country and acid folk of songs like “Country Chris” and “Company Oil”, to the last song “Astrodome”, with a mellow and soft beginning and a surprising Crazy Horse­ish end, you will feel the importance of this intense experience.
C+C=Maxigross always try to look for new inspiration through collaborations and exchanges. In this case Hagfors brought the experience of the best Norwegian musical scene (like Motorpsycho and Jaga Jazzist) and Maxigross shared the love for their native place and the local musical scene, with whom they are deep involved. In fact, C+C=Maxigross own the label Vaggimal Records and are involved with the organization of several events, included a psychedelic festival on the mountains around Verona: the Lessinia Psych Fest, who hosted, in a special place on high altitude, besides Jennifer Gentle and many Italian acts, the guitarist and singer Miles Cooper Seaton, well know for his band Akron/Family. This is more than a simple journey, this is "An Instantaneous Journey with Martin Hagfors & C+C=Maxigross".

The adventure of the psychedelic collective C+C=Maxigross began in 2009, when the band decided to record in a house on the mountains. They put together a group of songs they wrote with friends, during evenings spent around the fire or walking through Lessinia's woods. When the EP "Singar" came out they never expected that their name would spread from blog to blog, magazine to magazine. This success allowed them to play everywhere in Italy, from the North to the South. In 2012 they won the Arezzo Wave, one of the main Italian music festivals, and eventually landed in the United States for a mini­tour with one stop at the CMJ Music Marathon in New York.
In April 2013 they recorded their first album “Ruvain” (Vaggiamal/Audioglobe), with some songs produces and recorded analogically on 8 tracks by Marco Fasolo (Jennifer Gentle) and some others recorded live by the band itself in their studio on the mountains, during long nocturnal jam sessions.
“Ruvain”, a word that in an ancient language called “cimbro” means “to make noise”, was acclaimed by critic and won the PIMI price for the best self­produced album, at MEI, the meeting of Italian independent labels, and allowed them to play for a year and a half with no breaks. Highlights of this tour were several international festivals like Primavera Sound 2014 in Barcelona, Eurosonic in Groningen (NL), Reeperbahn and Fusion Festival in Germany. They shared the stage with some of their favorite artists like Built to Spill, Miles Cooper Seaton of Akron/Family and Jacco Gardner.
In the spring of 2014 they made a special tour with the Norwegian musicans Martin Hagfors (HGH, ex Home Groan), with whom they recordet and EP. The project was called: "An Instantaneous Journey with Martin Hagfors & C+C=Maxigross".
In June 2014 they organized the first edition of the Lessinia Psych Fest, international festival of folk an psychedelic folk, who hosted on the mountains around Verona, artists like Jennifer Gentle, Miles Cooper Seaton (Akron/Family), Hobocombo, The Assyrians and many more.
In the fall of 2014 they will retire again in their studio to record their second album, that will be release in the spring of 2015.
The music of C+C=Maxigross was ofter described as psychedelic folk, a word that good defines their beginnings, when the sound was mainly acustic and enriched by vocal harmonies and simple arrangements, like traditional songs from the mountains. Now that C+C=Maxigross became a powerful live band, the electric part turned fundamental also during the composition process and the new songs are more reminiscent of Grateful Dead and Crazy Horse, and always devoted to the craziness of Os Mutantes.

Photos by Ana Blagojevic. Artwork by Mattia Pasquali.
From an idea by Damiano Miceli and Gianluca Giusti.

Instantaneous Journey thanks to: everyone who joined on the recordin' session on Vaggimal and came to see us on the Instantaneous Tour, Damiano, Gianluca, Phill, Bianco, Ana, Spok, all the good, the bad and the ugly promoters, Sicilia Bedda in our hearts, Lessinia in our minds.