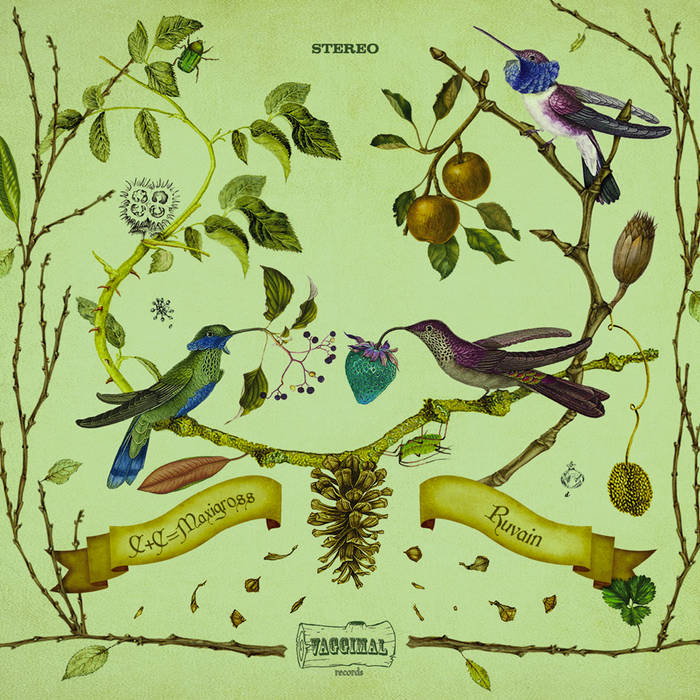 Two years after “Singar," a word that in Cimbrian (an ancient dead language of Lessinia) means “to sing”, C+C=Maxigross are back with their first real album, “Ruvain” which means “to make noise."

The 14 songs which make “Ruvain” are the result of a long process that came about after two-years of intense touring, which the band faced with an attitude comparable to some of the great live bands from the '60s and '70s like the Grateful Dead and Neil Young & the Crazy Horses. The ideas for their composition are derived from choral music, from the different skills of the band members (they all sing and play various instruments), from the variety of languages which they use (English, Italian, Spanish and, of course, Cimbrian) but the album also takes its inspiration from the magic and mysterious atmosphere that one feels on the mountains around Verona -- where the band rehearses, composes and records.

Some of the album's songs were produced, recorded and mixed by Marco Fasolo from Jennifer Gentle (Sub Pop), using an analogic 8-track recorder, while some others were recorded and mixed entirely inside the band's own house studio on the mountains. The choice to record the tracks live and in one take rather than layering the components together over a period of time was crucial: by all being in the same room and performing the song together, adding just a few essential overdubs, using vintage instruments and microphones, the band has created a warm, deep, immediate and almost forgotten sound.

“Ruvain” is therefore the genuinely sincere documentation of nocturnal jam sessions of vocal harmonies -- jam sessions that often ended at sunrise, when the village of Vaggimal wakes up to start a new day.

The 14 songs of “Ruvain” tell stories about old postcards, mental and physical trips, walks on the hills (because the band doesn't only like mountains), creeks which make rumours, friendly cows, days of the week we should forget, missed calls, Croatian grandfathers, Spanish sailors, holy spaceships and night bakers. The album ends with a magical instrumental melody, recorded with only one microphone, in which C+C=Maxigross ask us to follow them in this psychedelic adventure on the top of their mountains, where you will find not only snow and nature, but also folk and lysergic pop songs which look to the grand Anglo-American tradition.

The adventure of the psychedelic collective C+C=Maxigross began in 2009, when the band decided to record in a house on the mountains. They put together a group of songs they wrote with friends, during evenings spent around the fire or walking through Lessinia's woods. When the EP "Singar" came out they never expected that their name would spread from blog to blog, magazine to magazine. This success allowed them to play everywhere in Italy, from the North to the South. In 2012 they won the Arezzo Wave, one of the main Italian music festivals, and eventually landed in the United States for a mini­tour with one stop at the CMJ Music Marathon in New York.
In April 2013 they recorded their first album “Ruvain” (Vaggiamal/Audioglobe), with some songs produces and recorded analogically on 8 tracks by Marco Fasolo (Jennifer Gentle) and some others recorded live by the band itself in their studio on the mountains, during long nocturnal jam sessions.
“Ruvain”, a word that in an ancient language called “cimbro” means “to make noise”, was acclaimed by critic and won the PIMI price for the best self­produced album, at MEI, the meeting of Italian independent labels, and allowed them to play for a year and a half with no breaks. Highlights of this tour were several international festivals like Primavera Sound 2014 in Barcelona, Eurosonic in Groningen (NL), Reeperbahn and Fusion Festival in Germany. They shared the stage with some of their favorite artists like Built to Spill, Miles Cooper Seaton of Akron/Family and Jacco Gardner.
In the spring of 2014 they made a special tour with the Norwegian musicans Martin Hagfors (HGH, ex Home Groan), with whom they recordet and EP. The project was called: "An Instantaneous Journey with Martin Hagfors & C+C=Maxigross".
In June 2014 they organized the first edition of the Lessinia Psych Fest, international festival of folk an psychedelic folk, who hosted on the mountains around Verona, artists like Jennifer Gentle, Miles Cooper Seaton (Akron/Family), Hobocombo, The Assyrians and many more.
In the fall of 2014 they will retire again in their studio to record their second album, that will be release in the spring of 2015.
The music of C+C=Maxigross was ofter described as psychedelic folk, a word that good defines their beginnings, when the sound was mainly acustic and enriched by vocal harmonies and simple arrangements, like traditional songs from the mountains. Now that C+C=Maxigross became a powerful live band, the electric part turned fundamental also during the composition process and the new songs are more reminiscent of Grateful Dead and Crazy Horse, and always devoted to the craziness of Os Mutantes.

Recorded and mixed by Francesco Ambrosini at Vaggimal Studios (Sant'Anna d'Alfaedo, Italy) between may and august 2012, except track 1, 3, 10 mixed, recorded & produced on tape by Marco Fasolo with the help of Jean Charles Carbone at Abnegat Studios (Vicenza, Italy) between november 2011 and january 2012. Mastered by Samuele Tezza & Francesco Ambrosini at Sample Studio (Pescantina, Italy).
Marco Fasolo played drums on track 3. Zeno Baldi played Farfisa Chorus on track 7. Regi barked at the beginning of track 3.

This record is absolutely Lessinia-made. Again and again.